"Country Music" from behind the Iron Curtain.... 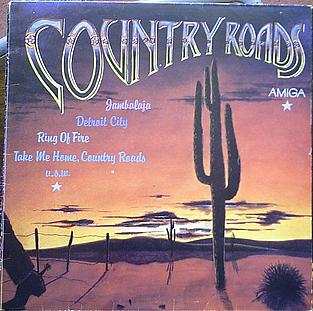 It sure sounded "Country" (with the canned applause and everything) and must have given GDR citizens a similar feeling as when watching Marlboro commercials on West German TV -- even though hardly anyone could understand the lyrics and despite the fact that in 1985 none of the musicians were likely to "ever play in Texas" and that it was next to impossible in the GDR to be "a thousand miles away from home waitin' for a train"....

I'm told (from a reliable source at WikiLeaks) that a take of "Don't Fence Me In" was attempted, but aborted by the Stasi "observer" in the studio.... Back in 1996, while going through my non-Dylan records, I came across an album, I hadn't listened to for quite a while (maybe because on first listening I had deemed it too "scholarly" and too far removed from the poignancy of Woody's and/or Dylan's talking blues).

Upon consulting the booklet furnished with the album (John Greenway, "Talking Blues," Folkways, released in 1958), I was struck by the many links (too many to be coincidental, IMHO) to talking blues on tapes of early Dylan performances (especially Minnesota Party Tape 1960 and Indian Neck Festival, May 6, 1961) and his own compositions in that genre ("Talkin' New York,"Talking Bear Mountain," " etc.).

I honestly believe that (besides Harry Smith's "Anthology of American Folk Music", also on Folkways) this is one of the major single sources of Dylan's early repertoire and that some of the Guthrie talking blues were learned "second-hand" from this album.

The album contains a total of 15 talking blues, of which 6 are by Guthrie or at least Guthrie-related ("Talking Union" is the old Almanac Singers song and Pete Seeger might have contributed to this one along with others in the group besides Woody): 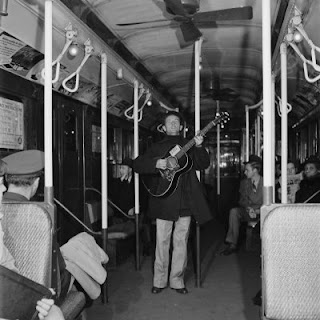 and (most interesting of all in the Dylan context) "Talking Subway."

Even the sequence of the songs on Dylan's tape is exactly the same as on the Greenway album.

What really gives this album away as an almost certain source for some of Bob Dylan's early repertoire is "Talking Subway" (Woody Guthrie):

Of the eleven stanzas, according to the liner notes,
"the first four may be found in a small collection of Guthrie's songs, issued in 1947"
("American Folksong," edited by Moses Asch).

BUT:
"The last seven stanzas were obtained by Dr. Greenway from Guthrie at a later date
and have never been published or recorded before."

The striking similarities between "Talking Subway" and Bob's "Talkin' New York" are too numerous to list here.

Therefore, I just want to concentrate on images found in the last seven (never before published) stanzas, which crop up in similar form in Dylan's song: 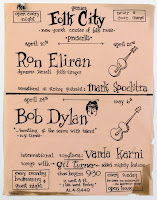 In addition to these rather blatant "borrowings" from "Talking Subway",
"Talkin' New York" even contains imagery derived from other songs on Greenway's album.

"But they got a lot of forks 'n' knives, and they gotta cut somethin',"
echoes lines from "Talking Butcher":
"'Cause he wants to cut me with that butcher knife. He got fire in his eyes. Boy! He wants to cut."

Greenway's album even seems to have influenced Dylan as late as 1965:
Just compare these lines from "New Talking Blues" (originally recorded by Chris Bouchillon in 1928) to the well-known chorus of Dylan's "Tombstone Blues:"

"Mama's in the pantry fixin' up the yeast,
Sister's in the kitchen preparin' for the feast..."

Frankly, I consider it rather "sloppy" research by Todd Harvey, who cites my 1996 article (on p. 103 of his The Formative Dylan), but fails to correctly identify Tom Glazer's "Talking Inflation Blues", referring to it by its rather common (albeit wrong) title in Dylan collectors' circles as "Talking Lobbyist" and "origin unknown" -- all it would have taken him to come up with the CORRECT TITLE would have been consulting the liner notes to the Greenway album (which were quoted by me).

In the light of "scholarship of such magnitude", I am certainly not offended, when Todd Harvey (farther down on the same page) dismisses my 1996 findings, seemingly altogether, by claiming:

"In order for Greenway to be the basis of 'Talkin' New York', however, we must agree that Dylan was influenced by one or more of the seven 'lost' verses...." (ibid.).

I truly think that I have proven JUST THAT (with several examples) - additionally, the paraphrasing of imagery from "Talking Butcher" for another line of "Talkin' New York", the exact sequence of three songs from Greenway's album in one of Dylan's earliest recorded performances, and the obviously persisting influence of songs from this album up to 1965, makes Todd Harvey's dismissal of my findings rather absurd and illogical -- he obviously did not even consult the source (liner notes) I quoted, but feels compelled to come up with a rather vague "theory" of his own (in order to not having to commit himself one way or another) :


Some recordings by "The Talking Comedian of the South" Chris Bouchillon
(arranged chronologically by date of release, NOT by date of recording): 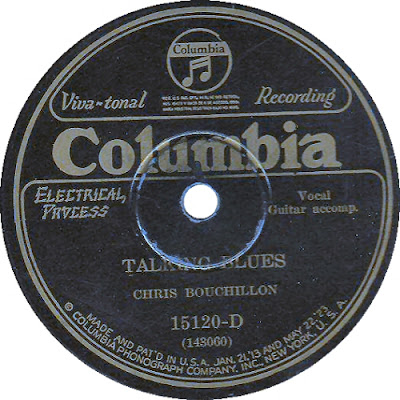 ALL TRACKS
(Discographical info from http://www.78discography.com/COL15000D.htm)

JOHN GREENWAY - "TALKING BLUES" (1958) - excerpts only (to illustrate this post)


ROBERT A. ZIMMERMAN - four "talking blues" (Minnesota Party Tape, 1960)
These recordings were done with the artist's permission and prior to his recording contract.

I was just alerted that the 1992 "Bobfest" (Bob Dylan's 30th Anniversary Concert) is online as streams from NL.Given the fact that Dylan content is "closed down" left and right all over the net, this might be your last chance to watch this extraordinary tribute concert. The third segment includes footage from the rehearsals for that event.

I have embedded links to the streams -- none of the material is hosted on this site! 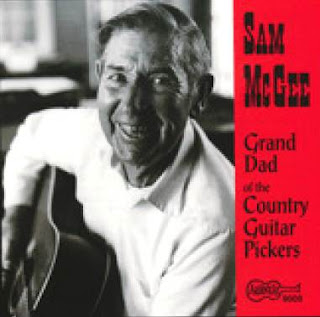 TRACKS MARKED AS "OMITTED" COULD NOT BE INCLUDED
BECAUSE OF THEIR COPYRIGHTED STATUS (first release in 1960s or later).
THEY CAN BE FOUND ON THE EXCELLENT UNCLE DAVE MACON BOX-SET
BY BEAR FAMILY RECORDS.
Eingestellt von fred_at_work um 07:59 1 Kommentar: