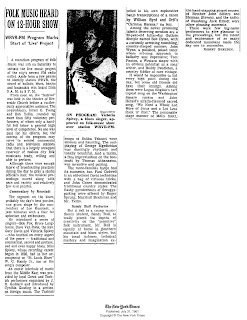 Recently, I came across two CDs of amateur recordings from the July 29, 1961 "Saturday of Folk Music", broadcast on WRVR, New York, NY.


Whoever had the foresight to record this for posterity, did it with amateur equipment off the air -- there is a fair amount of interference and the reel-to-reel recording was stopped, whenever the taper seemed not to be interested in an artist. Upon restarting, the beginning of songs are cut frequently, as the taper did not manage to push the button on time -- so, quite a few songs are fragments only.

Moreover, this is from a tape labeled "Part 2" -- other tapes have not been located so far, although they might exist, based on the following clue from my detective bag:

-- The performance of a yet unsigned Bob Dylan from that date (featuring Danny Kalb and Ramblin' Jack Elliott) is NOT part of the tape labeled "Part 2" (as Dylan's performance is in circulation for quite a long time, there could be other tapes including his performance and that of others somewhere).


I have no idea, unfortunately, about the sequence of performers during this 12-hour marathon, but have included (unsigned) Bob Dylan's performance for the sake of (temporary) completeness. 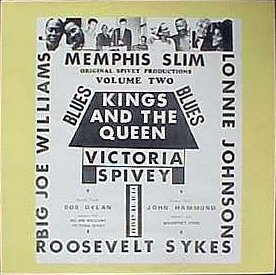 Kick back, relax, and enjoy a certainly less-than-perfect historical audio document of an event half a century ago, where Suze Rotolo started flirting with Bob Dylan and where Bob might have first met Len Kunstadt and Victoria Spivey, leading to his recording session with Victoria and Big Joe Williams....


For your convenience, I have transcribed Robert Shelton's review of this event (New York Times, July 31, 1961):

A marathon program of folk music was run on Saturday to initiate the live music project of the city's newest FM radio outlet. Aside from a few pauses to identify station WRVR, the sound of ballads, blues, banjos and bouzoukis was heard from 9 A. M. to 9 P. M.

From noon on, the "festival" was held in the theatre of Riverside Church before a vociferously appreciative audience. The co-producers, Israel G. Young and Bob Yellin, rounded up more than fifty volunteer performers, of whom only a handful fell below a general high level of competence. No one was paid for his efforts, but the success of the program may serve to remind commercial radio and television stations that there is a largely untapped reservoir of zealous city folk musicians ready, willing and able to perform.

Although there were enough lapsv [SIC] of broadcasting practices during the day to gray a studio official's hair, the musical proceedings moved along with pace and variety and relatively few arid patches.

The segment on the blues, probably the day's best portion, was given shape by the commentary of Len Kunstadt, a jazz historian with a flair for aphorism and enthusiasm.

He introduced a series of singers—Bob Fox, Bruce Langhorne, Dave Van Ronk, the Rev. Gary Davis and Victoria Spivey —who touched on every aspect of the genre — traditional and commercial, sacred and profane, sad and even happy blues. Miss Spivey, whose recording career began in 1926, had as her accompanist on "St. Louis Blues" W, C. Handy Jr., son of the song's composer.
An exotic interlude of music from the Middle East was provided by local Greek and Turkish performers organized by J. R. Goddard and introduced by Cynthia Gooding in a section on foreign music. The Turkish songs of Saliha Tekneci were sinuous and haunting. The oud-playing of George Mgrdichian was dancingly rhythmic and tonally beautiful. And a taxim, a free improvisation on the bouzouki by Thomas Athanasiou, was inventive and pulsing.

The more-familiar banjo had its moments, too. Paul Cadwell is an old-school florid technician with a bag of virtuoso tricks, and John Cohen demonstrated traditional country styles. The flashy pyrotechnics of Scruggs-picking were offered by Roger Sprung, Marshall Brickman and Mr. Yellin.

But it fell to a young music-J theory student, Sandy Bull, to really plumb the depths of creativity on the "primitive" folk instrument. Mr. Bull is equally at home in Southern mountain and blues styles, but his tonal richness, technical mastery and imagination excelled in his own explorative banjo transcriptions of a canon by William Byrd and Orff's"Carmina Burana," no less.

Among the newer promising talents deserving mention are a 20-year-old latter-day Guthrie disciple named Bob Dylan, with a curiously arresting mumbling, country-steeped manner;
John Wynn, a polished, poised tenor whose art-song approach to balladry was impressive; Tom Paxton, a Western singer with' an obvious potential as a songwriter, and Buddy Pendleton, a country fiddler of rare vintage.

It would be impossible to list every high point during the day, but some old friends did
have  their innings.  Among them were Logan English's tart topical song on the Washington Square    ruckus    and    John Herald's alfalfa-flavored sacred, song, "We Need a Whole Lot, More of Jesus and a Lot Less Rock 'n' Roll."

The personable stage manner of Molly Scott, the hand-clapping gospel rousers of Brother John Sellers and Herman Stevens, and the antics of Rambling Jack Elliott were other pleasing moments.

There were few big-name performers to give glamour to the proceedings, but the talent
and exuberance of so many dedicated musicians made the day one to remember.

17   Bruce Langhorne
Don't Take Everybody To Be Your Friend