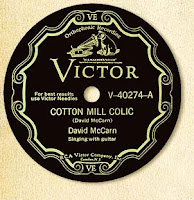 I first heard the name Dave McCarn as the author of a song ("Everyday Dirt") covered by Doc Watson on his Folkways debut album, a little later in connection with his trilogy of political songs about labor struggles in the cotton mills of Gastonia, NC, "Cotton Mill Colic" (written in 1926, recorded in 1930), "Poor Man, Rich Man" (Cotton Mill Colic #2) (1930), and "Serves 'Em Fine" (Cotton Mill Colic #3) (1931). 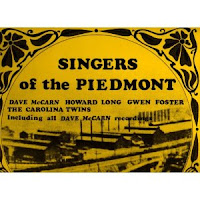 Not unlike Bob Dylan in the 1960s, Dave McCarn used a harmonica rack to accompany himself on harmonica while playing guitar at the same time. In the 1970s, Bear Family Records' earlier incarnation (Folk Variety) issued an LP album, basically a "bootleg", with Dave McCarn's complete recordings, enclosed lyrics and liner notes by Mike Paris:

"Born in 1905 in Gaston County, North Carolina, Dave McCarn entered the textile industry at an early age. He had a great interest in music and played both guitar and harmonica. He developed what might be termed a 'hot-guitar' style, light and syncopated -- and which could well owe its origins to the raggy, Carolina Blues style of Blind Boy Fuller and Gary Davis. During the mid-1920s, McCarn was playing with a local string band when he began to write his own songs. In 1926 he wrote ''Cotton Mill Colic'', perhaps his most significant composition. Yet none of the band had any idea of trying for a career in music -- McCarn least of all. Music was purely a relaxing hobby, providing a welcome relief from millwork.

But the textile industry was hard-hit by depression and industrial trouble, and in 1929 Gastonia witnessed the brutal murder of Ella May Wiggins, a union organiser and strike leader, by a textile company incited mob. Shortly after this, McCarn and his brother set out west in search of more regular employment. However, after a fruitless search, the brothers returned south mostly by courtesy of the railroad companies box-cars. In May 1930, they were in Memphis, Tennessee. Their financial situation was desperate and Dave was about to pawn his guitar when a negro musician told him that the Victor Company were holding auditions for local talent. McCarn, with nothing to lose, auditioned for Ralph Peer. Peer was impressed with McCarn and recorded two songs -- Everyday Dirt and Cotton Mill Colic. The recording fee was sufficient to get the brothers home to Gastonia and the record was later released the following August. 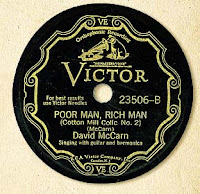 The record sold well and six month later Peer cabled McCarn to record again. For this session (November 1930), McCarn wrote or adapted five pieces -- including a sequel to his Cotton Mill Colic. He recorded once again, for the last time, in May 1931. For these sessions he was accompanied by Howard Long on second guitar. Long was probably a fellow mill worker, and may have been a member of McCarn's string band in the 1920's. Four titles were issued as Dave & Howard. lt is surprising that McCarn was not recorded again, for his records apparently sold well. But his brief foray into the recording industry was over, and he returned to millwork, forgotten by all except a handful of country music enthusiasts. In 1961, he was located and interviewed by Mike Seeger in Stanley, NC. Dave McCarn died on November 7th, 1964, 'Unaffected by folksong boom and somewhat amused that his songs still lived' (Archie Greene notes to 'Tipple, Loom and Rail' -- Folkways FH 5273)."

DAVE McCARN
On this segment of Backroads & Banjos, Art presents the funny, jovial, and poignant songs of Gaston County, NC native, Dave McCarn. At first McCarn pursued songwriting on guitar and harmonica as relief from his daily work at the textile mill, but after auditioning in 1930 for Ralph Peer, a man credited for founding the early country music industry, his original recordings of “Cotton Mill Colic” and “Everyday Dirt” allowed him a brief foray into professional music before returning permanently to millwork in 1932.
Eingestellt von fred_at_work um 04:17 Kommentare:

I added a little tribute to Suze Rotolo (with links to some audio and video) to my "Bob Dylan Roots" blog.
Eingestellt von fred_at_work um 12:04 Keine Kommentare: