Whereas "Country Music made in GDR" (see my two previous posts) was rather "lame" and somewhat "fake", other Warsaw Pact countries seemed to be more interested in "the real McCoy" -- as far back as 1978, Johnny Cash and his family entourage performed in Prague (documented by a Czech TV broadcast and a Supraphon album with parts of his performance) and other American artists like George Hamilton IV or Wanda Jackson recorded studio albums with Czech musicians for the state-owned Supraphon label. 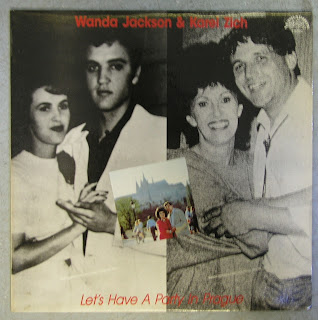 Back in 1990, books and records from GDR public libraries appeared on (West) German fleamarkets, and I was able to acquire a few interesting Warsaw Pact items, like a 1987 studio album by Rockabilly Queen Wanda Jackson paired with Czech artist Karel Zich
("Let's Have A Party In Prague", Supraphon 11 0199-1311ZB).