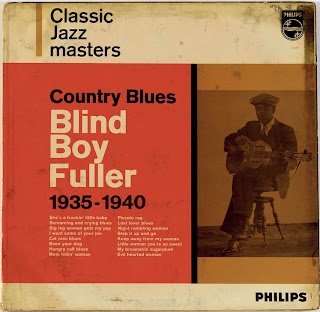 In a tribute to Suze Rotolo earlier this year, Jeff Gold (of recordmecca.com) posted pictures/scans of two items from Dylan's personal record collection (folk blues on the European/Dutch Philips label, acquired from Suze) on his own (highly recommended) blog.

Jeff commented:
"To me, these were talismanic objects, filled with the music we now know inspired Dylan so much.  When I asked Rotolo by email why Dylan had written on his albums, she told me that it was similar to making notes in the margins of books for him.  Later I realized at the point he annotated these, he had only been going by the name Bob Dylan for perhaps a year and a half--in fact, he had only legally changed his name in August, 1962--three months before buying these.  It's almost as if he was seeing how his new name fit alongside those of these legendary artists."

I have tried to recreate one of these albums from more recent sources/transfers in my own collection -- most tracks should be superior sound/quality than that of the original -- basically "bootleg" -- album, which Bob Dylan acquired during his first trip to London, England, in late 1962 (possibly at Dobell's Record Shop in Charing Cross Road, where he contributed providing back-up vocals and harmonica for an album by Richard Farina and Eric Von Schmidt). 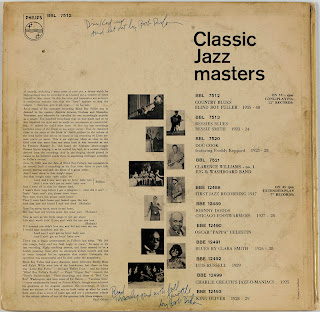 Please note Bob Dylan's comments on the original sleeve:
"Drinked up and let out by Bob Dylan"
-- one song from this compilation
("Step It Up And Go") was covered by Bob on his 1992 album "Good As I Been To You".

Full recording details in ID3 tags:
01 She's a Truckin' Little Baby
02 Screaming and Crying Blues
03 Big Leg Woman Gets My Pay
04 I Want Some of Your Pie
05 Cat Man Blues
06 Been Your Dog
07 Hungry Calf Blues
08 Mojo Hidin' Woman
09 Piccolo Rag
10 Lost Lover Blues
11 Night Rambling Woman
12 Step It Up and Go
13 Keep Away from My Woman      Since I'm not aware which take of this track has
14 Keep Away from My Woman      been used for this compilation, I've included both.
15 Little Woman You're So Sweet
16 My Brownskin Sugar Plum
17 Evil Hearted Woman
Eingestellt von fred_at_work um 17:14