First Session:
In the spring of 1927, Judge Hay, the Grand Ole Opry announcer, arranged for DeFord and two other musicians to record at Columbia Records in Atlanta. DeFord recorded only two songs, "Pan American Blues" and "Hesitation Blues." Judge Hay was not pleased with the session and canceled the deal. The two Columbia sides were never issued.

"I recorded eight tunes and I played every one of them perfect the first time. They couldn't get over that. They said I was the first one to ever record in that studio who didn't have to play something more than once."
(Source: PBS DeFord Bailey - A Legend Lost - RECORDINGS) 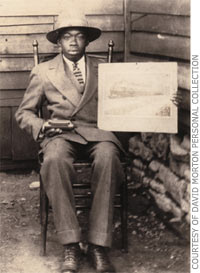 Third Session:
DeFord's third commercial recording session happened at Victor in Nashville. It was the first recording session to take place in what would become Music City USA. Only three of the eight sides he recorded were released by Victor: "Ice Water Blues," "Davidson County Blues," and "John Henry."

"Between 1973 and 1982 David Morton recorded many hours of his visits with DeFord Bailey, and most of them included music by the musician. Only one of those tapes, however, was a gift of music for someone else. That particular tape with a large number of tunes and conversation was made by DeFord in December 1973 specifically as a Christmas present for David's father who had long been a fan of the Harmonica Wizard. On the tape David explains why it is being made and DeFord extends a personal greeting to "Mr. Wilson Morton" in Shawmut, Alabama, and then proceeds to play many of his favorite tunes. As usual in David's visits with DeFord, much conversation inevitably took place in the taping, showing their relationship, as well as providing a most valuable recording of many of DeFord's tunes.

David took the tape to Alabama at Christmas in 1973 as a gift from DeFord Bailey, and returned with a large ham, and other presents from his father and mother for his friend. Wilson and Edna Morton kept the tape as long as they lived, and frequently played it. After their death, David brought the tape home with him. Some of the tunes on the tape were later used in the Tennessee Folklore Society CD of DeFord's music. In early 2006 David had the tape digitized and gave copies to DeFord's children, ex-wife and special friends who had helped him in calling attention to DeFord's accomplishments. Later in the year Andrew Morton persuaded his dad to make this special "Christmas present" of DeFord's music available on this web site. We think you'll enjoy it!"
(David Morton)

David Morton's biography of DeFord Bailey and a CD of 1973-1982 recordings
are both available through the Tennessee Folklore Society or places like amazon.com.

"One of the first letters sent to Lost and Found Sound came from a listener who told us that no series about the sounds of the 20th century would be complete without the sound of the Pan American Train passing the WSM Radio tower in Nashville. The 10,000 watt station broadcast the sound live each day at 5:08pm - Nashvillians and listeners from all across the South and Midwest set their clocks by the sound.
In searching out this sound, we were led to the remarkable story of Harmonica Wizard DeFord Bailey, the first black to perform and tour with WSM's Grand Ole Opry, whose signature song, Pan American Blues, inspired the naming of the show. DeFord's story, along with the story of WSM and its legendary Grand Ole Opry make up this program
Produced by The Kitchen Sisters (Nikki Silva and Davia Nelson) with Laura Folger. Mixed by Jim McKee at Earwax Productions, San Francisco"
(All Things Considered, November 24, 2000)