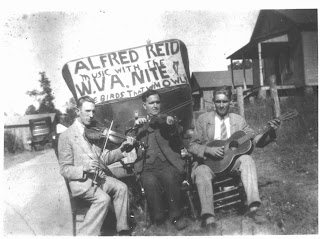 I first discovered Blind Alfred Reed (as a songwriter) through Ry Cooder's cover of his "How Can A Poor Man Stand Such Times And Live" (lyrics).

"What set Reed apart from most performers of the time, and brought him to Ralph Peer’s attention, were his self-penned numbers brimming with topical and social commentary.  He was a strict, God-fearing man, perhaps, whose views about the perils of damnation awaiting young ladies who bobbed their hair (“Why Do You Bob Your Hair, Girls”...) might seem a tad harsh to modern ears. But also one with a social conscience who also sang about racial inequality in “There’ll Be No Distinction There”...  and the inequities suffered by the poverty-stricken during the Great Depression on songs like “How Can a Poor Man Stand Such Times and Live” (as fate would have it, Reed himself is said to have died of starvation in 1956)." 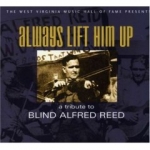 Blind Alfred Reed's initial recording session (Bristol, TN, Jul 28, 1927) has already been documented in this blog and can be downloaded HERE.